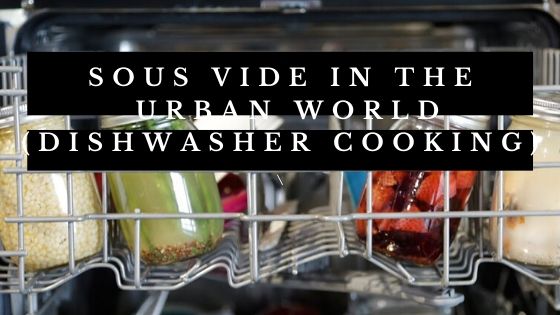 Posted by myecaloriecounts on August 10, 2017 | Featured

This technique gained it’s popularity when an Italian food writer Lisa Casali, a self-proclaimed dishwasher-cooking expert published a book on the subject called Cucinare in lavastoviglie (cooking in the dishwasher)

So how does it work?

Some suggest wrapping the food in foil but Casali, suggests the use airtight bags or mason jars to put food in and prevent the soapy water touching the food. You fill your jar with the food, little water and season for flavouring. The trick is to choose the highest heat setting and the dishwasher will work like a steam oven that goes up to a maximum of 75°C, cooking the food inside.

Once the washing cycle is over, take the jars or bags out (the jars could be hot so use an oven glove or cloth), drain the excess water and serve the meal hot. The veggies should be tender yet crunchy and the meat well cooked yet succulent.

Sous vide is a French word which means under vacuum, however, in the context of cooking it refers to a cooking technique in which vacuum sealed food is placed in water baths and cooked at very precise temperature and for a timed duration.

The foods are generally cooked at lower temperatures for a longer time and it relies on the superior ability of water to transfer heat to food. Sous vide, ensures thorough and even cooking while retaining the moisture and succulence of the ingredients.

Vacuum-sealing the ingredients prevents anything escaping. So your sous-vided greens (beans/broccoli) comes with all its vitamins and trace elements still there, whereas boiling removes 50% of them or more – and it also preserves the original gorgeous rainforest green colour.

As stated by some, this method of cooking was developed in the mid–1970s by chef Georges Pralus at the internationally renowned Michelin Three-Star Restaurant – Troisgros, in Roanne, France. It was initially used as a means of minimizing costly shrinkage of and optimally cooking delicate foie gras- a luxury food product made of the liver of a duck or goose that has been specially fattened.

Some reasons why sous vide is considered as the most beneficial way and is a secret of many top chefs at various restaurants around the world is because:

It was our first attempt to try out this technique and the results weren’t quite as expected. I did not place any dirty dishes in the dishwasher as it sounds kinda gross to use the same water to cook fresh food, which is being used to clean soiled dishes even though the water is said to not touch the food. The jars I placed in my dishwasher had- green beans, pasta, quinoa, cauliflower, onions in vinegar and a foil wrapped carrot with garlic pods.

After an hour of the washing cycle, all the food was still raw and could not be eaten without being cooked using other techniques.

That being said, I will try cooking with this intriguing culinary technique again with maybe a different setting on the dishwasher and get more edible results!